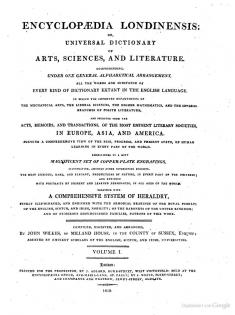 Encyclopaedia Londinensis; or, universal dictionary of arts, sciences, and literature

Comprehending, under one general alphabetical arrangement, all the words and substance of every kind of dictionary extant in the English language. In which the improved departments of the mechanical arts, the liberal sciences, the higher mathematics, and the several branches of polite literature, are selected from the acts, memoirs, and transactions, of the most eminent literary societies, in Europe, Asia, and America. Forming a comprehensive view of the rise, progress, and present state, of human learning in every part of the world. Embellished by a most magnificent set of copper-plate engravings, illustrating amongst other interresting subjects, the most curious, rare and elegant, productions of nature, in every part of the universe; and enriched with portraits of eminent and learned personages, in all ages of the world. Together with a comprehensive system of heraldry, finely illuminated, and enriched with the armorial bearings of the royal familiy; of the english, scotch, and irish, nobility; of the baronets of the United Kingdom; and of the numerous distinguished families, patrons of this work. Compiled, digested, and arranged, by John Wilkes of Milland House, in the county of Sussex, esquire; assisted by eminent scholars of the English, Scotch, and Irish Universities
WhyteLondon1810-1829
Sprache:
englisch
Schlagwörter:
19. Jahrhundert
Anzahl der Bände:
24
Einheitssachtitel:
Encyclopaedia Londinensis
Bandeinteilung: