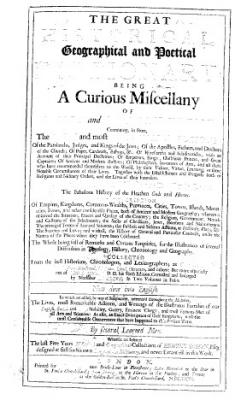 Being a curious miscellany of sacred and prophane history, containing, in short, the lives and most remarkable actions of the patriarchs, judges and kings of the jews; of the apostles, fathers, and doctors of the church; of popes, cardinals, bishops, &c. Of heresiarchs and schismaticks, with an account of their principal doctrines; of emperors, kings, illustrious princes, and great captains; of ancient and modern authors; of philosophers, inventors of arts, and all those who recommended themselves to the world, by their valour, virtue, learning, or some notables circumstances of their lives. Together with the establishment and progress both of religious and military orders, and the lives of their founders. The genealogy of several illustrious families in Europe. The fabulous history of the heathen gods and heroes. The description of empires, kingdoms, common-wealths, provinces, cities, towns, islands, mountains, rivers, and other considerable places, both of ancient and modern geography; wherein is observed the situation, extent and quality of the country; the religion, government, morals and customs of the inhabitants; the sects of christians, jews, heathens and mohametans, the principal terms of arts and sciences; the publick and solemn actions, as festivals, plays, &c.; the statutes and lawy; and withal, the history of general and particular councils, under the names of the places where they have been celebrated. The whole being full of remarks and curious enquiries, for the illustration of several difficulties in theology, history, chronology and geography. Collected from the best historians, chronologers, and lexicographers, as Calvisius, Helvicus, Issacson, Marsham, Baudrand, Hoffman, Lloyd, Chevread, and others: but more especially out of Lewis Morery, D.D. his sixth edition corrected and enlarged by Monsieur Le Clark [..]. Now done into english. To which are added by way of supplement, inter-mix'd throughout the alphabet, hhe lives, most remarkable actions, and writings of the illustrious families of our english, scotch and irish nobility, gentry, eminent clergy; and most famous men of all arts sciences: as also an exact description of these kingdoms, and the most considerable occurences that have happened to the present time. By several learned men; wherein are inserted the last five years historical and geographical collections of Edmond Bohun, esq.; designed at first for his own geographical dictionary, and never extant till in this work
RhodesMeredithHarrisNewboroughLondon1694
Sprache:
englisch
Schlagwörter:
17. Jahrhundert
Anzahl der Bände:
2
Onlineausgaben:
www.nationallizenzen.de...
Einheitssachtitel:
Grand dictionnaire historique
Paralleltitel:
Great historical, geographical, genealogical and poetical dictionary
Bandeinteilung: